A Trophy Investment That Can Also Keep You Punctual

FINE watches have long been about more than just telling time. They have served as gifts for graduation and retirement. They have been collected and coveted for their craftsmanship. They are often flaunted as status symbols.

Even so, the current economic climate would not seem conducive for timepieces filled with wheels and springs — the finest ones do not use batteries — that start at $15,000 and go up to $1 million or more. Plus, any cellphone can tell you the time.

It turns out, though, that the market for vintage timepieces has been booming. Watches are now the sixth largest department at Christie’s, accounting for $116 million in sales in 2011. That was a 26 percent increase from the year before, and much of the growth is being driven by Asian collectors.

“We have new collectors looking at watches as alternative investments,” said Sam Hines, head of watches in Asia for Christie’s. “There has also been the formation of a trophy market.”

These trophies are watches that are very rare, if not one of a kind. Last year, the most expensive wristwatch sold at auction was a Patek Philippe chronograph from 1928, which sold in Geneva for $3.6 million, a record price for that model.

The demand is only partly driven by the watches’ condition, rarity and “complications” — the horological term for how many different things a watch keeps track of, from day and date to bells that chime at precise intervals. Instead, much as an art gallery does for an artist, the top-end watchmakers have created an allure around their brands.

Patek Philippe, the strongest performer at auctions with eight of the 10 highest prices at Christie’s in 2011, focuses on legacy, with advertisements evoking fathers and sons in earnest discussion over what a watch can mean to their relationship. Breguet has featured its most famous owners in advertisements, including Napoleon, Marie Antoinette and Winston Churchill.

Audemars Piguet has gone the other way, signing up a roster of athletes whose sports connote precision, including golfers, tennis players and racecar drivers.

So it would seem safe to assume that these timepieces are good investments. Certainly watchmakers and auction houses are in no hurry to dispel that notion. But many collectors — even those whose own watches have doubled or tripled in value — are quick to dissuade people who want to speculate on time, as it were.

“From an investment point of view, most watches do not do very well,” said William Massena, a real estate consultant who collects Patek Philippe watches. “You have to be a smart buyer to have a watch hold its value.”

He said his collection, which began with a Patek Philippe Calatrava that he bought in Paris 18 years ago, has appreciated substantially, with some watches tripling or quadrupling in value. But he attributes that success to timing, a bit of luck and a very different market.

“People weren’t interested in these watches when I bought them,” Mr. Massena said. “I was lucky enough to get in early and to have the taste of my generation — sporty, chronograph, bigger watches.”

So what gives a watch investment potential as opposed to just being an expensive way to tell time? Here is some of what I learned.

The likelihood that watches will increase in value depends on how few were made and how complicated they are. But their value also depends on how the watch has been maintained.

Paul Boutros, an engineer who collects watches made by Vacheron Constantin and Audemars Piguet, said owners often inadvertently undercut the investment potential of a watch by regularly wearing it. Sweat, for example, can enter the case and cause it to decay. Or if the face fades or shows wear, and the owner gets it refinished. “The person wearing the watch likes that, but we collectors want all original all the time,” he said. “We look for legitimacy in the watch.”

Hugues de Pins, president of Vacheron Constantin North America, advised collectors to look for something rare in gold or platinum and to focus on watches made in limited editions if they hope for their purchase to appreciate. His company’s watches range in price from $10,000 to $800,000.

The company recently bought a rare pocket watch it made in 1918 for $1.7 million at auction. The 20-karat gold watch, owned by James Ward Packard, the automobile maker, had been sitting unnoticed in a family bank vault for 60 years.

Fraud is an obvious one. And these fakes are not the knockoff Rolexes sold at tourist stops in Manhattan. The outright fakes are usually models that were produced in greater quantities than the rare, complicated watches, and feel real, too.

There are subtler problems. Patrick van der Vorst, a former Sotheby’s appraiser and the founder of ValueMyStuff.com, said determining whether a watch was fake or real was easy for an appraiser. But assessing if someone has cut corners in maintaining a watch takes more time.

“What mainly happens, even for the very expensive watches, is that someone buys a $2,000 watch and reuses the original wheels or crown but in the more expensive watch,” Mr. Van der Vorst said. “They’re original watch parts, but they wouldn’t have belonged to that watch.”

While the watch is not a fake, its value is lower.

The big risk now is that the brands that have appreciated so much over the last 30 years may not be the ones that appreciate over the next decade.

Mr. Massena said he wrote a post on the TimeZone watch forum in 1998 about the vintage watches that he thought were most undervalued. “I was wrong in everything I wrote,” he said. “If you want to invest, buy stocks or real estate.”

Mr. Hines said that while there was high demand from Asian collectors for many types of fine watches, their interest was increasingly directed at small brands, like F. P. Journe and Greubel Forsey.

Some watchmakers are taking a more active role in the management of their vintage market.

Audemars Piguet has created an exhibition to celebrate the 40th anniversary of the Royal Oak, its distinctive and popular sports watch. The exhibit opened for four days in New York last month and will travel to Milan, Paris, Beijing, Singapore and Dubai.

Mr. Bennahmias said the company’s watches had not been appreciating as quickly as they did before 2008, when the company was producing limited edition watches whose values could rise 20 to 40 percent from the preorder to release date. He said clients now were more interested in the watch holding its value or not depreciating too greatly.

For people who covet these fine watches but cannot afford a new one, this could be an option. Vacheron’s vintage collection in New York was selling a round, gold wristwatch from 1956 for $9,000. Mr. de Pins said a similar model new would retail for $18,000.

Short of that, a collector can hope to be lucky. Mr. Boutros, whose passion for watches started as a hobby with his father, said they once bought an Audemars Piguet in 1989 from a jewelry dealer who could not even pronounce the watchmaker’s name.

“The quality just stood out, every little detail,” Mr. Boutros said. “That’s when I realized the high end is for real.”

What is a Case Mark on a Watch or Clock?

When a watch or clock is repaired, horologists stamp or scratch a system of small letters and numbers inside the back of the case. This records who has worked on the timepiece and can be used to correspond to records at the repair shop. Although each business has their own record-keeping system, these records could describe what actions were taken to fix your watch or clock, the ownership of the piece at the time of repair, etc.

The American Watchmakers-Clockmakers Institute is the only repository for watch and clock case marking information in the U.S. We have issued over 5,500 case marks to date. We will provide case mark information in two instances:

1) To our members to help them identify prior repairs, and
2) To law enforcement in the case of theft or forensics investigations.

Timezone.com offers online courses for
those interested in learning the basics of watchmaking: 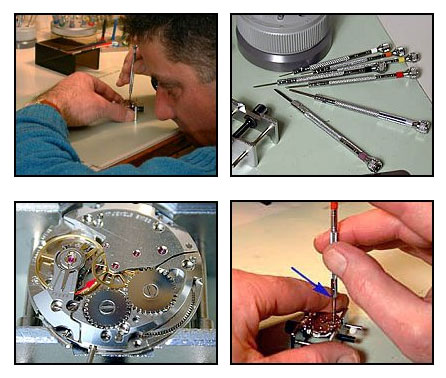 The course materials are entirely online, so you can take the course anywhere in the world where you have internet access. Once you enroll, you will receive a user name and a password to access the Level you signed up for. You can view the lessons at your leisure, and print them out if you like.

These courses do not cover sufficient ground to allow you to begin diagnosing problems and repairing broken watches. The courses are intended to give you a good appreciation for basic watchmaking tools and skills, and for simple mechanical watch movements.  Please contact www.awci.com if you desire to learn more about watchmaking after completing the TZ Watch School courses.

JOIN THE MWCA on May 4, 2012 for a presentation on the inspiration for the mechanical figure in the movie Hugo.
Hear about Andrew Baron’s restoration  of this amazing machine. One Night Only: May 4, 2012 – 7:00pm. Maillardet’s automaton has one of the largest “memory” of any such machine, 4 drawings and 3 poems.

For more information visit: www.mwca.us. Sponsored by the Midwest Watch and Clock Association and the Minnesota Clockmakers Guild.

Must have completed factory training and certification by at least one of the following: WOSTEP, Breitling, Omega, Tag Heuer of Cartier.

It’s the education you’ve been asking for!

Beginning in February 2012, AWCI will offer all CW21 and CMW21 holders a special series
of continuing education courses focusing on the service procedures of specific high-grade
timepieces. These courses will cover proficiencies such as:

In 2011 the watch classroom at the AWCI Academy of Watchmaking was equipped with the latest technology equipment to improve the quality of our instruction. This recent classroom upgrade makes every seat a good seat for viewing and comprehending a topic.